When cement, aggregate (sand), and water are mixed to form pool plaster, about twice as much water is added as is needed to hydrate (harden) all of the cement. This is done because if the mix is too dry and thick, it is almost impossible to place and trowel the plaster to a smooth finish.What happens to the excess water? As the sand and hydrated, crystallized cement grains settle, the excess water rises to the surface. This process is called bleeding, and the rising water is referred to as bleed water. Bleed water then evaporates from the surface.Swimming pool plaster is commonly troweled in 3 to 5 separate passes – the early passes placing the material where it needs to go and consolidating it, and final passes creating the smooth, final surface. One of the arts or skills of the plastering trade is properly timing the troweling passes. If troweling is performed when bleed water is present on the surface, forcing bleed back into the plaster paste causes excessively high water:cement ratios in the surface finish, weakening it. Finishers learn to time the troweling passes so that bleed water is evaporated, and the surface is still workable before it hardens too much.The opposite problem of forcing too much water into the hydrating surface is allowing the surface to dry too fast. If the surface becomes too dry, with a dry “crust” on the surface but a wet paste underneath, a weakened zone can be formed just subsurface. This can happen when plastering on dry, hot days, during low humidity, in wind, etc. It can also include too much drying time between trowel passes, excessive hard troweling, and overworking the finish.If this happens, the top of the finished plaster will look fine, even for awhile after the pool is filled. However, after time this weakness is manifest by a 16th to an 8th inch layer of the surface flaking off, generally in small areas or spots. Often, these weak areas do not flake off until the pool is drained of its water and the plaster dries out.Here are some pictures of flaked pool surfaces: You can see the round indented area with the loss of plaster. This could be described as a “moon-like crater” look, or a shallow and sunken pit look. Note that the newly exposed surface (where the flaking occurred) is extremely rough and course, while the older existing surface surrounding the missing plaster area is much smoother. 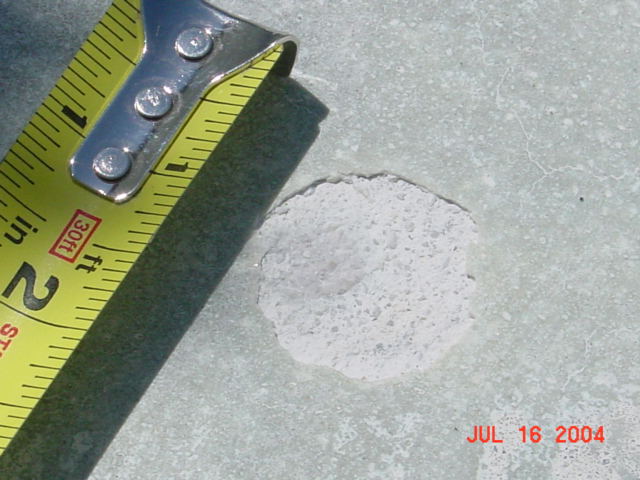 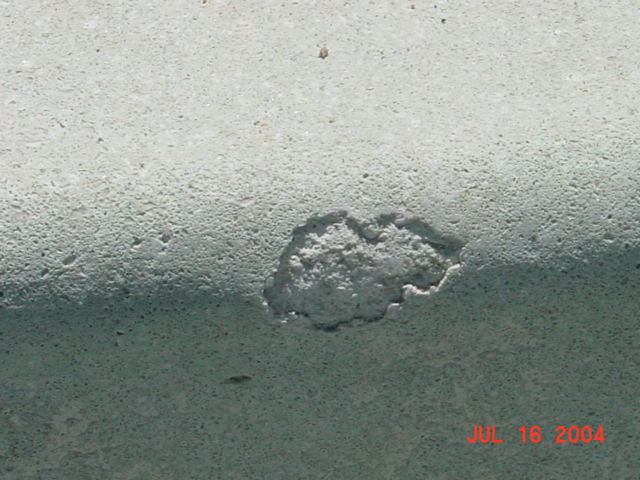 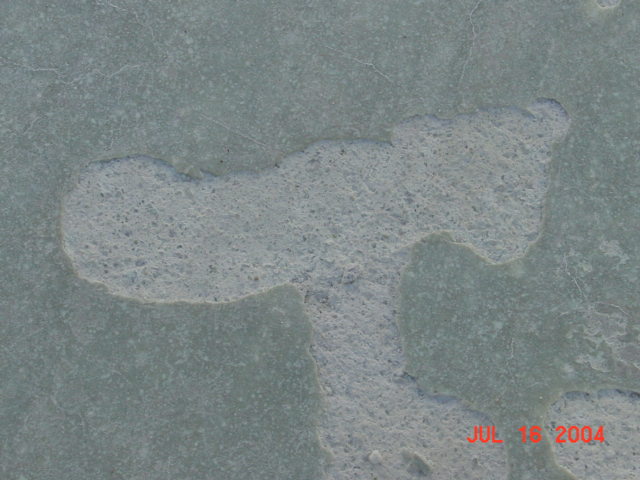 The cement/concrete industry has documented this loss of a thin surface layer as a surface defect caused by improper application and troweling, (such as we have already described), and refers to it by many names, including surface flaking, buckling, blistering, scaling, or delamination. It is not referred to as spalling, since spalling is generally reserved to describe deeper delaminations. But in the pool plastering industry, the term “spalling” has become a commonly used term to describe this shallow surface loss. (We in the pool industry use the term “delamination” or bond failure to describe deeper, bond separation between new and old plaster or between plaster and the substrate; and we use the term “scaling” to describe calcium carbonate depositing from pool water onto the plaster surface…)Since the vast majority of pool plaster does not spall, blister, or flake off, we can see that most plasterers properly apply, cure, trowel, and finish the pools they plaster. Spalling is relatively rare, and when it does occur it is most commonly found on a step radius, on shallow end floors, and around the main drain – these being places where finishing can be an additional challenge for a number of reasons. The steps radiuses are occasionally over-worked to insure smoothness and straightness, and the floors sometimes get too much troweling due to being walked on by the pool finishers while troweling. Walls are rarely over-troweled.One thing that does not play a role in plaster spalling (or peeling) is water chemistry – aggressive water is not required to form spalls. In fact, as we have mentioned, the inherent weakness leading to spalling is created before the pool is ever filled with water.In disagreeing with the above statement, the National Pool Plaster Council (NPC) claims in their 2009 Technical Manual that “blisters and spalls can be caused by aggressive pool water chemistry.” Of course there is no documented research substantiating this statement in the NPC Tech Manual. In fact, a prior NPC 1998 Tech Manual acknowledged that there was no documentation for their position that aggressive water can cause spalling in swimming pools.Obviously, some pools or spas have spalling, along with an etched and copper stained plaster surface. But the mistake is assuming that the aggressive water that caused the etching and copper stains also caused the spalling. That is not the case.If aggressive water really was a factor in causing spalling or flaking to occur, then rain water (especially acid rain) would be causing this problem to occur consistently in all flat cement and concrete surfaces. Rain water has zero alkalinity and calcium hardness, with a pH below 7.0, far more aggressive than slightly aggressive pool water. Instead, we only occasionally see this problem on small, or isolated areas of concrete slabs, where nearby concrete surfaces are relatively smooth with no visible defects. This fact confirms that something other than aggressive water caused this problem since it rains everywhere (along with the documented, authoritative statements by the Portland Cement Association and the American Concrete Institute).If aggressive water caused spalling in swimming pools, we would also see aggressive etching of the exposed aggregate in the spalled pit. We don’t. And if aggressive water could cause spalling in pools, we would also see spalls on the top step of pools where a trichlor feeder has sat (creating a very aggressive condition). Instead, in that situation we see yellow acid-etched rings, not spalls. Also acid-started and acid-washed pools would be preferentially prone to spalling – but they are not.Aggressive water does not remain aggressive as it penetrates a cement surface. When aggressive water is in contact with a cement surface, the aggressive water is being neutralized as it reacts with and etches a cement surface. Aggressive water cannot affect the cement matrix below the surface and cause delamination of a layer of plaster, unless there are existing cracks on the cement surface.Unfortunately, pool owners and pool service techs are still being unfairly blamed for causing this plaster defect.
E-mail me when people leave their comments –
Follow